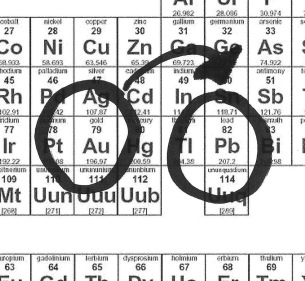 He never succeeded*, but in the last decades, we have seen many examples of what I call “The Reverse Midas Effect.” That is, examples of turning gold (Au) into lead (Pb).

Maybe not in a literal sense of turning gold into lead (who the heck would want to do that?), but the action of turning something of great value into something of much lesser value. The government seems to specialize in this type of alchemy.

Intervention and control of free markets often leads to The Reverse Midas Effect. Attempts to intervene and control any complex system that is in balance is fraught with peril (that is, risk of catastrophic failure), whether we acknowledge it or not.

In some cases, the risks can be estimated and engineered for in the design. But if failure does occur, the more complex the system and the intervention, the more catastrophic the failure.

If a beaver dam fails, it is unlikely to cause the loss of human life. Not so for a man-made dam–hence, the tremendous effort invested in engineering dams, and building in a large margin of safety.

If land in a flood zone is developed–even if it is protected by flood walls, locks and pumps, if environmental models turn out to be wrong and the built-in margin of safety is overwhelmed, the loss can be catastrophic.

If a political body intervenes to control (or distort) the free market for housing, what would happen if those interventions fail? What if the models and expectations were wrong or miss an important data point–or many data points? (Hint: we know already.) The more complex the system, the less likely it becomes that a model is going to be able to capture all of the relationships and predict future outcomes.

If a regulator seeks to control or distort the free flow of capital (in the form of currency or investment), what happens if (when?) those efforts fail?

Many individuals try hard to keep their own body in balance–proper nutrition, hydration, exercise–because they know that failing to do so will ultimately result in damage and degradation. Doesn’t it make sense to extend that balanced approach to other, larger “bodies” as well?

People, ideas, capital and markets all work best when they are allowed to be free. (I know, some of my friends will point to the U.S. and say that the free market for _____ has failed. My response is that there are very few truly free markets, because the regulators, who should be playing the role of the referees–as in a football game–are instead often picking sides.)

In this vein, I encourage you to read the op-ed in The Wall Street Journal by William Poole, former President of the Federal Reserve Bank of Saint Louis, “Negative Interest Rates Are a Dead End.” (WSJ, February 9, 2016.) Link for subscribers.

Investors need to be on the lookout for The Reverse Midas Effect because it can hide or compound political risk. When picking sectors or individual securities, be on the lookout for underlying distortions in supply, demand or other factors. (Two recent examples that come to mind would be oil because of the historical distortion of supply which has been interrupted lately and Puerto Rico, where Federal tax incentives created distorted and impermanent economic incentives. For a little more about political risk for bond investors, see “Bonds Are Not Stocks.”) When the natural balance is restored, valuations will adjust too–potentially with dramatic speed or magnitude.

*In the myth he did, but regretted it. In the real world, with modern science and our understanding of matter, it is now possible to move some protons around to transmute lead into gold, but doing so would require an enormous amount of energy, the cost of which would greatly exceed the increased value of the lump of metal.

The opinions expressed and the information contained herein is based on sources believed to be reliable, but its accuracy or appropriateness is not guaranteed. Past performance is interesting but is not a guarantee of future results. The author does not provide investment, tax, legal or accounting advice. Investors should consult with their own advisor and fully understand their own situation when considering changes to their strategy, tactics or individual investments. Investments in bonds are subject to gains/losses based on the level of interest rates, market conditions and credit quality of the issuer. Additional information available upon request.